Balancing the Needs of Stakeholders

Getting work done in today’s government environment requires active participation and support from a broad range of stakeholders. But how do you engage the right people, at the right time, in the right way? CG Strategy brings the tools and expertise to help you answer these questions.

As leaders of public programs, today’s federal government executives are constantly balancing the conflicting views of multiple stakeholders. They are seeking tools and processes to understand, analyze, and address policy trade-offs and make difficult decisions. In order to take informed action, they need methods for communicating with stakeholders, especially when the stakeholders don’t agree with the government’s path forward. The expectations of Americans for increasing public participation in government decision-making and improvements in digital technology make stakeholder engagement critical to the success of public sector organizations and leaders.

At CG Strategy, we work with leaders to develop customized tools and processes that effectively solicit, analyze, and incorporate stakeholder input. We partner with our clients to navigate the stakeholder input process and build strong, lasting relationships.

A federal agency initiated a comprehensive effort to address the concerns of the wide array of stakeholders involved in the ongoing debate about the National Flood Insurance Program (NFIP) in advance of the program’s reauthorization. This program is intended to reduce the impact of flooding on private and public structures by providing affordable insurance to property owners and encouraging communities to comply with floodplain management regulations. NFIP leadership engaged CG Strategy to help effectively incorporate stakeholder input into the development of a new path forward for the NFIP.

We began this project by designing and facilitating a Stakeholder Listening Session, where we could hear the key issues facing the program, identify a foundational understanding among the various groups, and document the diversity of opinions about how to implement the NFIP. The session included stakeholders from federal, state, local, and tribal governments, as well as associations, non-profits, and the private sector. We structured the session to give all parties the opportunity to have their voices heard and their thoughts officially documented.

As the project progressed, we ensured stakeholders were engaged at every stage. Policy alternatives were developed based on the feedback of stakeholders at the initial listening session. Then these alternatives were refined through a series of public meetings and internal staff events. CG Strategy also conducted qualitative and quantitative analysis to assess the policy alternatives. The qualitative analysis included academic panels with representatives from 14 universities and think tanks.

As a result of the significant stakeholder engagement, our client was well positioned to influence the NFIP reauthorizing legislation. Our client was able to provide well-informed, data-driven technical assistance on the reauthorizing language. Several stakeholders who had been previously skeptical of the NFIP’s future showed public support for the recommendations.

WHAT OUR CLIENTS SAY

“On every engagement we’ve had with CG Strategy what I have found is that you get to work with extremely bright and likable staff that always bring a well planned and facilitated approach, thought leadership, terrific value, and outcome based results. Along the way you will sense their commitment to your mission and experience a fun, energetic, and intellectually stimulating environment. These guys care about your success and are true partners.” 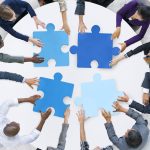